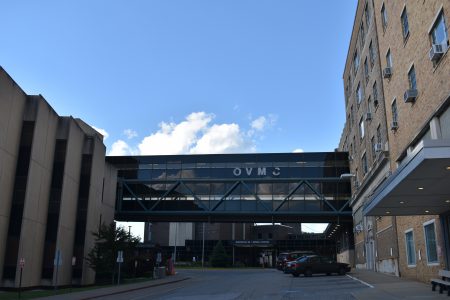 Photo by Eric Ayres
After several weeks of weighing the pros and cons of acquiring the former Ohio Valley Medical Center property, members of Wheeling City Council are expected to make a final decision on the proposal during their regular meeting on Tuesday night.

WHEELING –Wheeling City Manager Robert Herron on Friday disclosed costs associated with the proposed acquisition of the former Ohio Valley Medical Center Property, which is expected to come up for a final vote before city council on Tuesday night.

The former hospital shut down operation in September, and the current owners of the sprawling facility — Medical Properties Trust or MPT — have offered to transfer ownership to the city for what has been described as closing costs and current taxes.

Wheeling officials originally considered acquiring one of the buildings on the OVMC campus — the Valley Professional Center on Chapline Street — for possible use as a new Public Safety Building. However, MPT countered by offering to transfer all of the properties to the city.

Since then members of Wheeling City Council have been in the “due diligence” process of determining the actual costs associated with acquiring and maintaining such a huge piece of property with several buildings included with it. Officials have met behind closed doors a number of times to discuss the possible purchase of OVMC and have vowed to publicly disclose the many items being weighed before a final decision is made on the acquisition.

“That’s pending an appeal on the assessment of the property,” Herron said, noting MPT is seeking to have the assessed property value lowered in its vacant status.

“We’ve really looked at a variety of scenarios on the holding costs — from demolitions to other costs associated with owning the buildings,” Herron said. “This includes costs to keep the utilities on so the buildings don’t deteriorate. To basically hold the buildings, maintain the heat and electricity, keep with water on for the sprinkler systems, and provide maintenance and minimum security, it’s estimated to cost $540,000 per year.”

Herron said if the number of buildings are reduced in terms of ownership by the city — through demolition or sale — the estimated holding costs would decrease.

The building at OVMC known as the nurses residence by all accounts would likely need to be demolished and removed. It is unclear whether or not other buildings — such as the original East Building on the campus — would need to be torn down, and may likely depend on marketing of the other facilities and needs of potential buyers.

Estimated demolition and asbestos abatement costs associated with the removal of the nurses residence building is expected to be around $1.2 million, Herron said.

One concern about the campus has been the centralized boiler system which would need to be removed and replaced in order for the city to repurpose and market the buildings separately. Herron indicated these “mothballing costs” would be absorbed over a two- to three-year period.

“Those costs, including the separation of the boiler system, would be about $1.6 million,” he said. “This would need to occur with any type of demolition or when splitting up the buildings for marketing purposes.”

If city council decides on Tuesday to acquire the OVMC property, the idea of creating a Public Safety Building at the site would move to the front burner, Herron indicated.

The city has also been eyeing former warehouse property on 19th Street for its new Public Safety Building, for which funding through the city’s new User Fee or City Service Fee is being generated as of the first of this year. If council decided to opt for the 19th Street site, the deteriorating warehouses would be razed, environmental abatement would have to take place at the site, and the city would have to construct a new Public Safety Building from the ground up to house new headquarters for its police and fire departments.

Herron said the estimated cost of moving forward with the Public Safety Building at the 19th Street location is around $14.5 million. The estimated cost to convert the Valley Professional Center into a new police headquarters and create a new fire department headquarters on the site of the former nurses residence building after it is razed would be around $12.8 million. The city manager said if council opts to use the OVMC campus for its Public Safety Building, the difference in costs between the two sites would leave enough money to renovate all of the current fire stations in the city and still have more than $1 million leftover.

In the years before Alecto took over ownership of OVMC, there were no property taxes collected from the site because it was a tax exempt community hospital. When Alecto took over the operation of the hospital and it became a for-profit operation, the city created a Tax Increment Financing District at the site, which benefited the city, the local schools and the Regional Transit Authority.

The Tax Increment Financing District has provided $1.5 million that has been set aside by the city and can be used to cover the acquisition carrying costs of OVMC, Herron said. An additional $4 million also has been secured when the Tax Increment Finance District bond issue was sold, and this funding has been earmarked for needed renovation of the adjacent Center Wheeling Parking structure. The city will only move forward with the parking garage renovations if the investment makes sense with more occupancy of the buildings on the former OVMC campus, however.

“There are benefits to acquiring this property, and there are also risks,” Herron said, who noted that one building needs a new roof, a water line needs to be repaired in another and various maintenance also need to be performed throughout. “We want to seek funding for these general renovations in the buildings. We’ve been in contact with the governor’s office and the U.S. Economic Development Administration and regional economic development offices as part of our due diligence efforts.

“Ultimately, our goal is to create a tax base with this property. We want to start from day one and begin marketing these buildings to the private sector immediately. There have been entities that have expressed mild interest already, but they are waiting to see how this project unfolds.”

Herron said MPT has been very forthcoming with information requested while city council members have been mulling over this major purchase. Members of city council are expected to discuss the matter and bring it to a vote during their regular council meeting Tuesday night.


Today’s breaking news and more in your inbox