If you had any doubt as to Saudi Arabia’s intentions about the oil market, this chart should put that to rest. 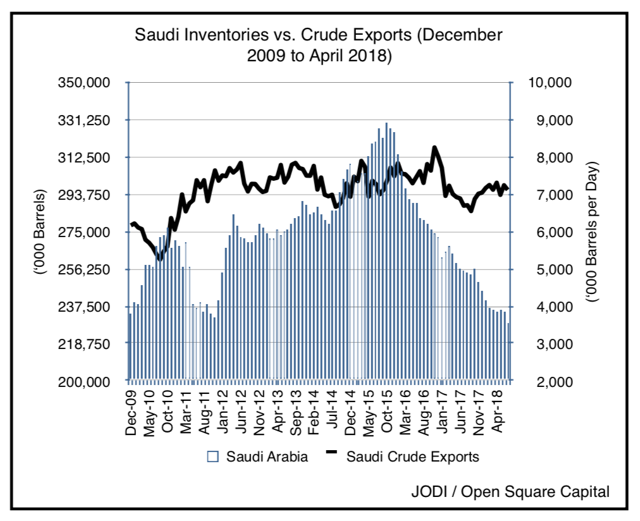 This is based on the latest information from JODI (July) and shows Saudi Arabia’s exports holding steady around 7M bpd but crude inventories falling to 220M barrels. Since Saudi Arabia has held exports relatively stable, much of the draws from inventory are coming from increased refinery demand in the past few years. 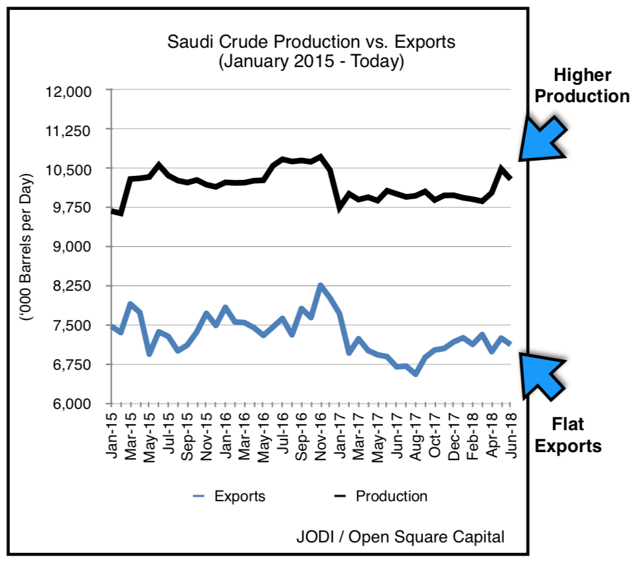 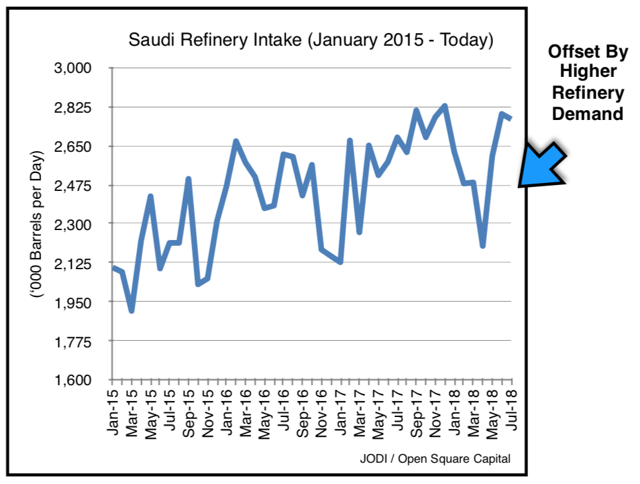 Thus, with exports remaining steady, the unyielding supply/demand equation means that oil has to come from somewhere, and thus inventories have effectively fallen. Saudi Arabia has been either unwilling or unable to sustainably increase production materially to cover this shortfall over the past few years, opting instead to bring inventory levels down.

Think about this. A willingness to bring inventories down to levels not seen in the past 9 years (the last time Saudi oil inventories were this low was September 2009) means it’s sending a clear signal that it’s no longer willing to be the oil reserve for the world. Now some would argue that it’s only done so because the economics of selling oil in the past three years have been atrocious since the oil price crash, but in the past year oil has begun to recover. As oil prices have recovered, you’d expect that the inventory draws would have slowed, or begun arresting itself, and neither has happened.

Consequently, we think it’s something entirely different. It’s a monetization of reserves, whether to fund today’s government expenditures or invest in the future. Moreover, it’s lowering Saudi Arabia’s longer-term capital requirements to build and maintain such a stockpile. In turn, this means as inventories further decline, the world’s buffer (i.e., beyond the easily traceable OECD inventories) becomes increasingly thin, exacerbating oil price swings. Now if some other country were willing to undertake this capital expenditure, then perhaps we can find an offset, but the largest oil reserve (i.e., the US SPR) is similarly drawing down.

As shale producers and multi-national companies have similarly shied away from long-term/long-lead mega-projects, it begs the question who’s looking out for the future? Certainly not Saudi Arabia, or at least not yours. As this energy shortage tightens, and as oil prices inflect, don’t expect Saudi Arabia to come to the world’s rescue. In fact, don’t expect there to be a rescue, which means as inventories further decline, the world is going feel the full brunt of the energy crisis. There is no prince charming, and certainly not one in Saudi Arabia.

As always, we welcome your comments. If you would like to read more of our articles, please be sure to hit the “Follow” button above.

I wrote this article myself, and it expresses my own opinions. I am not receiving compensation for it (other than from Seeking Alpha). I have no business relationship with any company whose stock is mentioned in this article.

Previous: US transportation hiring binge underscores economic confidence
Next: Midlands on the move – the changing face of transport and logistics