Home sales experiencing a decline in Kentucky; prices and inventory on the rise throughout the state

Even with the decline, total home sales for the first half of 2018 are still on track to be the second highest ever for Kentucky. Through June, home sales reached 25,253, only 2.7 percent (or 697 total homes) below the same period in 2017 when 25,950 homes sales were recorded. 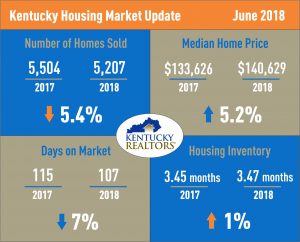 Across the country, sales were down slightly for the month, with the National Association of REALTORS (NAR) reporting a decrease of 2.2 percent when compared to June 2017.

There continues to be a mismatch between the growing homebuyer demand in most of the country in relation to the actual pace of home sales, which are declining.

Yun said the root cause is without a doubt the severe housing shortage with available properties going under contract very fast. This dynamic is, in turn, keeping home price growth elevated, pricing out would-be buyers and ultimately slowing sales.

Nationally, housing inventory is 0.5 percent above a year ago, which is the first year-over-year increase since June 2015. Inventory levels across the U.S. stand at a 4.3 month supply. 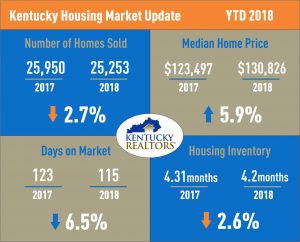 “Properties are not staying around on the market very long,” said Steve Cline, the 2018 president of Kentucky REALTORS. “Even though the inventory shortage didn’t show a statistical decline in Kentucky, homebuyer demand continues to strengthen in many markets and there just aren’t enough homes currently available to satisfy the demand, especially in the more affordable price ranges.”

This is evident when looking at the days on market (DOM), which shows how many days a home has been actively listed for sale.

On the national level, the amount of time a property stayed on the market is surprisingly low, with NAR reporting 26 days in June, down from 28 days a year ago. Fifty-eight percent of homes sold in June across the country were on the market less than a month.

“The current level of homes available in Kentucky is far from what’s needed to satisfy demand levels,” added Cline. “And given the fact that the growing economy is bringing more potential buyers into the market and new home construction is still below where it needs to be, this demand is driving up prices in many parts of the state.” 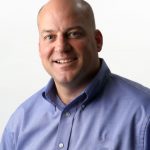 June marked only the second month (July 2017) where the median price exceeded the $140K threshold.

Nationally, the median home price in June reached $276,900, an all-time high, and up 5.2 percent from the same time last year when prices were $263,300. June marked the 76th straight month of year-over-year gains.

“Even with the upward momentum of prices for homes in Kentucky, they are still affordable when compared to the national picture,” said Cline. “In addition, reports are showing that a national trend of increasing supply may be playing out and if this proves to be true, prospective buyers will begin to see more choices and a softer price growth as we move forward.”

To view housing statistics for the state, as reported to Kentucky REALTORS, click here.